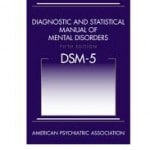 Two weeks before DSM-5 goes on sale, Thomas Insel,  Director of the National Institute on Mental Health (NIMH) writes that the DSM lacks validity and that “patients with mental disorders deserve better”.

According to Dr Insel, “The goal of this new manual, as with all previous editions, is to provide a common language for describing psychopathology. While DSM has been described as a “Bible” for the field, it is, at best, a dictionary, creating a set of labels and defining each. The strength of each of the editions of DSM has been “reliability” – each edition has ensured that clinicians use the same terms in the same ways. The weakness is its lack of validity. Unlike our definitions of ischemic heart disease, lymphoma, or AIDS, the DSM diagnoses are based on a consensus about clusters of clinical symptoms, not any objective laboratory measure. In the rest of medicine, this would be equivalent to creating diagnostic systems based on the nature of chest pain or the quality of fever. Indeed, symptom-based diagnosis, once common in other areas of medicine, has been largely replaced in the past half century as we have understood that symptoms alone rarely indicate the best choice of treatment.”

NIMH believes that a diagnostic system has to be based on the emerging research data, not on the current symptom-based categories. There is a need to begin collecting the genetic, imaging, physiologic, and cognitive data to see how all the data – not just the symptoms – cluster and how these clusters relate to treatment response.

That is why NIMH will be re-orienting its research away from DSM categories. “Going forward, we will be supporting research projects that look across current categories – or sub-divide current categories – to begin to develop a better system.” NIMH has launched the Research Domain Criteria (RDoC) project to transform diagnosis by incorporating genetics, imaging, cognitive science, and other levels of information to lay the foundation for a new classification system.

According to Dr Insel, “RDoC, for now, is a research framework, not a clinical tool. This is a decade-long project that is just beginning.”

Microcontent Learning and Engagement in CME

Pivoting in a Pandemic: Optimizing Expertise and Technology to Create Dynamic Learning Experiences