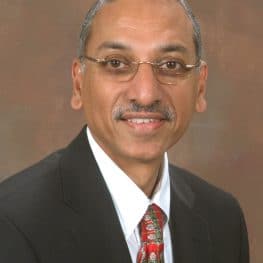 Satish Rao received his MD from Osmania Medical College, Hyderabad, India, his PhD from the University of Sheffield, UK, and the Fellowship of the Royal College of Physicians (FRCP) in London, UK, in 1997. He completed his training in internal medicine at several academic centers in UK and a clinical research fellowship in gastroenterology at the Royal Hallamshire Hospital, University of Sheffield, UK. Having spent 20 years at Iowa where he was Tenured Professor of Medicine and Director, Neurogastroenterology and GI Motility and Biofeedback Program, Department of Internal Medicine, University of Iowa Carver College of Medicine, Iowa City, Dr. Rao moved to the Medical College of Georgia, Augusta University, Augusta, GA where he is Tenured Professor of Medicine, Division of Gastroenterology/Hepatology and Founding Director, Digestive Health Center.

Dr Rao is one of a rare breed of academicians who has excelled as an outstanding researcher, distinguished educator and as a Master Clinician. Dr. Rao’s research interests focus on the pathophysiology and treatment of IBS, food intolerance, gas and bloating especially SIBO and SIFO, dyssynergic defecation and fecal incontinence. He has pioneered several new techniques and devices and has received several patents. He pioneered the technique of biofeedback therapy for dyssynergic defecation, and neuromodulation therapy for fecal incontinence. He has received numerous international awards. He is the only physician who has received all 3 meritorious honors from the American Gastroenterological Association (AGA), the AGA Distinguished Clinician Award, AGA Masters Award for Outstanding Clinical Research and the AGA Distinguished Educator Award. In 2005, he received the highest research award from American College of Gastroenterology (ACG) Auxiliary Research Award. In 2010, he received the highest honor from University of Iowa, University of Iowa Regents Award for Faculty Excellence. He has been awarded 15 Distinguished Visiting Professorships, 200 Visiting Professorships and the 2017 Augusta University Distinguished Researcher Award.

A very productive, federally (NIH) funded investigator who has recently been awarded an $18 million NIH grant, and sought-after speaker, Dr. Rao has edited 8 books, published over 400 articles with a H index of 63 and 10,500 citations. He has been selected as one of the “Best Doctors in America” and as America’s Top Doctors for over 20 years. He has mentored several Physicians from across the world, many of whom are leaders in their own countries. He is Past President of the American Neurogastroenterology & Motility Society. He is a master clinician, and patients travel from all over USA and abroad to seek his expertise in managing difficult motility problems.