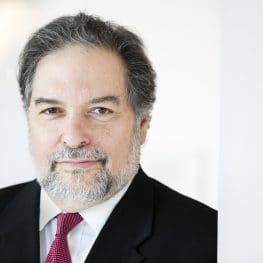 Paul Summergrad, MD, is the Dr. Frances S. Arkin professor and chairman of the Department of Psychiatry and professor of medicine at Tufts University School of Medicine and psychiatrist-in-chief at Tufts Medical Center. Dr. Summergrad served as the 141st president of the American Psychiatric Association, and is a past president of the American Association of Chairs of Departments of Psychiatry. Dr. Summergrad previously served as chief of Inpatient Psychiatric Services at Massachusetts General Hospital from 1987-1998 and as associate professor of psychiatry at Harvard Medical School.

An international leader in medical psychiatric illness and care, Dr. Summergrad’s research focuses on mood disorders, medical-psychiatric illness, and health system design. He has published extensively with over 100 peer review publications, books, book chapters and other communications. He serves on the editorial boards of Academic Psychiatry, Current Psychiatry and Personalized Medicine in Psychiatry and guest edited a special issue of Academic Psychiatry on strategic planning in academic departments of psychiatry. A sought-after speaker, educator and consultant, he has served as a visiting professor and has given invited lectures throughout the United States and internationally. He is a member of the Diagnostic and Statistical Manual 5 Steering Committee of the American Psychiatric Association and the Standing Committee on Nominations of the World Psychiatric Association. He chaired the work group of the APA board of the role of psychiatry in health care reform which commissioned the Milliman report on the total health care costs associated with psychiatric and substance use illness. He is a distinguished fellow of the American Psychiatric Association, and a fellow of the American College of Psychiatrists and a fellow of the American College of Physicians and has received numerous other awards and honors including the Distinguished Faculty Award from Tufts University School of Medicine. Most recently he was elected to Fellowship in the Royal College of Physicians – Edinburgh and was given the Leadership award of the American Association of Chairs of Departments of Psychiatry.

Dr. Summergrad earned his medical degree from the School of Medicine at the State University of New York at Buffalo in 1978 where he was elected to Alpha Omega Alpha in his junior year. He completed his training in internal medicine at Boston City Hospital and Boston University School of Medicine and in psychiatry at Massachusetts General Hospital and Harvard Medical School, where he was chief resident and a clinical fellow in psychiatry. He is board certified in both Psychiatry and Internal Medicine.