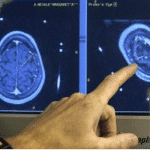 A study aimed at the treatment of patients with medically refractory Parkinson’s disease (PD), showed promising phase 2 results for a therapeutic approach to determine the safety and efficacy of AAV-GAD gene transfer into the subthalamic nucleus (STN) region of the brain. The overall goal of this approach is to normalize the activity of the STN and reduce the motor symptoms of PD. The gene transfer product, a disabled virus with a gene called GAD [glutamic acid decarboxylase], will be infused into the STN bilaterally using stereotactic surgical techniques.

Study investigators found that a single infusion of GAD directly into the brain’s subthalamic nucleus, via transport by a virus, can safely lessen the severity of symptoms and improve response to medication in patients with advanced PD. The GAD gene is thought to regulate the production of a neurochemical called GABA, which is underactive in some parts of the brain and overactive in others, resulting in tremors, irregular gait, language and cognitive problems, and difficulty in initiating movement.

Patients aged 30—75 years who had progressive levodopa-responsive Parkinson’s disease and an overnight off-medication unified Parkinson’s disease rating scale (UPDRS) motor score of 25 or more were enrolled into this double-blind, phase 2, randomized controlled trial, which took place at seven centers in the USA between Nov 17, 2008, and May 11, 2010. Of 66 patients assessed for eligibility, 23 were randomly assigned to sham surgery and 22 to AAV2-GAD infusions; of those, 21 and 16, respectively, were analyzed. Of the 16 patients who received a GAD infusion, unified Parkinson’s disease rating scale (UPDRS) motor scores decreased and showed a significantly greater improvement from baseline in UPDRS scores than placebo; half of the 16 subjects who got the gene therapy improved by nine points, while just three of the 21 subjects who got the sham surgery (14%) made such an improvement. Adverse events were mild or moderate, or were unrelated to treatment; the most common were headache and nausea.

Researchers concluded that the efficacy and safety of bilateral infusion of AAV2-GAD in the subthalamic nucleus supports its further development for Parkinson’s disease and shows the promise for gene therapy for neurological disorders.