Supported by an educational grant from Gilead Sciences, Inc. 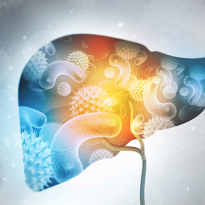 Prevalence of infectious diseases is substantially higher among patients with substance use disorders (SUDs). There are factors associated with drug use that increase the risk of infections, such as sharing needles and injecting supplies, presence of contaminants in drugs and drug use–related paraphernalia, risky behaviors associated with drug use, immune suppression secondary to chronic drug use, poverty, and homelessness. Persons with SUDs have low rates of health care utilization and may miss opportunities for early diagnosis and care of infectious complications of substance use. When infectious diseases are comorbid with drug use, they are associated with substantial morbidity and mortality and result in significant health care costs.1,2

The National Notifiable Diseases Surveillance System of the Centers for Disease Control and Prevention (CDC) has reported steady increases in hepatitis C virus (HCV) infections to 2.8 cases per 100,000 population in 2019, above the target of 2.1 per 100,000 population. This continued increase in HCV infections is fueled by injection drug use (IDU) among individuals age 18-40.3 The established goal of the National Hepatitis Progress Report is 1.7 cases per 100,000 population by 2025.4 Contributing to the risk among young people who inject drugs (PWID) is in part due to the high likelihood of sharing and/or reusing injection equipment and the decreased likelihood of access to harm reduction services and health care compared to older cohorts of PWID.5-7 The HCV treatment cascade in young PWID illustrates gaps that hinder HCV elimination. Among 3,748 young PWID in San Francisco, 66.4% were diagnosed with HCV, but only 9.1% had initiated treatment, and 50% had a confirmed cure. Unfortunately, no single solution can change the course of rising HCV infections. HCV elimination requires changes to public policy as well as improved access to and navigation of health care, mental health, and harm reduction services, community-level programs, and education, in addition to a reduction in stigma associated with substance use.3

Treatment of opioid use disorder (OUD) with opioid substitution treatment (OST) has been shown to reduce the transmission of HCV among PWID.8-13 A number of sites around the United States have successfully co-located treatment for HCV and OUD. Martinez and colleagues have reported positive outcomes at La Bodega in Buffalo, New York, integrating medical and addiction services through a hybrid model of outreach, referral, co-localization of direct-acting antiviral agents (DAAs) and OST services, and telemedicine.14-16 Rojas and colleagues assessed a decentralized hub and spoke model for HCV treatment administered in a Federally Qualified Health Center (FQHC) in San Diego, California, and reported successful treatment and retention among 1,261 patients treated by a multidisciplinary team of primary care physicians, nurse practitioners, and infection disease specialist supported by patient navigators.17 However, strategies and programs like these have not been widely implemented.

It has been hypothesized that OST may increase engagement in HCV care among PWID. In the recent publication Association Between Opioid Agonist Therapy and Testing, Treatment Uptake, and Treatment Outcomes for Hepatitis C Infection Among People Who Inject Drugs: A Systematic Review and Meta-analysis, Grebely and colleagues conducted a systematic review of existing literature to evaluate the association between OST and HCV testing and treatment uptake, and to assess the association between OST and adherence, treatment completion, and sustained virologic response (SVR) following treatment among PWID.18 The review entailed a total of 9,877 HCV cascade of care studies from electronic databases. After criteria for inclusion/exclusion were applied (e.g., study type, wrong populator or comparator, misaligned outcomes, duplicates), 22 studies were included in the meta-analysis.

Impact of OST on HCV Treatment Completion and SVR

The mechanism behind the associations between OST and HCV treatment are multifactorial, relating to the intersection of system-, provider-, social-, and patient-level factors. Engagement of PWID in the healthcare system is essential for medical care, mental health services, and harm reduction. Individuals receiving OST often establish a trusting relationship with their health care professional (HCP), through routine interaction, which promotes education and opportunities for testing and treatment.18

Stigma related to substance use can perpetuate negative attitudes toward PWID, creating barriers to seeking treatment and successful treatment. Williams and colleagues found that perceptions of substance-use stigma were associated with a higher likelihood of HCV infection in young PWID in suburban populations.7 Bias among clinicians related to substance use can contribute to a treatment-averse mindset and to flawed clinical care, including failure to implement proven methods of HCV treatment. A shift in language and terms that medicalize substance use is one key component to reduce associated stigma and psychosocial burden.19

Established biases and perceptions among HCPs about adherence to HCV treatment in PWID are not supported by the data. The HEpatitis C Real Option (HERO) Study comparing 12-week SVR in active PWID showed a positive HCV cascade of care in 83.6% of patients with HCV infection treated with sofosbuvir/velpatasvir, with 69.7% completing treatment and 56.2% achieving SVR. In the cohort assisted by patient navigation, 73.4% were adherent to treatment.20 Among 103 persons in the SIMPLIFY trial with recent IDU treated with sofosbuvir/velpatasvir for 12 weeks, 94% achieved HCV cure with no virologic failures and 96% had ≥ 90% adherence.21 Similar results were seen in pooled data of patients treated with glecaprevir/pibrentasvir (n = 2,256). In patients prescribed OST and reported IDU in the past 12 months, treatment adherence was 98% in the OST group and 99% among PWID not receiving OST. These data support treatment of PWID for HCV infection.22

Reinfection with HCV among PWID is another concern that may interfere with treatment. Yet a recent meta-analysis of 36 studies reflecting 6,311 person-years follow-up found that the overall reinfection among people with recent drug use (injecting or non-injection) was 5.9/100 person years (95% confidence interval [CI]: 4.1-8.5). Among people receiving OST with no recent drug use, HCV reinfection was 1.4/100 person-years (95% CI: 0.8-2.6).23

Perceptions, bias, and stigma have the power to interfere with treatment and prevention strategies for HCV. Data support the treatment of PWID. Findings from the previously mentioned Grebely et al review demonstrate that recent OST use is associated with improvements in HCV testing and treatment uptake, supporting the integration of HCV services in drug treatment centers.18