Check out the latest on addiction from experts in the field

This video is a replay of a plenary session from the 8th Annual Chair Summit Master Class for Neuroscience Professional Development held in Miami Florida on September 24-26, 2015.

This video is a replay of a plenary session from the 7th Annual Chair Summit Master Class for Neuroscience Professional Development held in Tampa Florida on September 11-13, 2014.

Chairman of Psychiatry and Health Behavior at Augusta University

The Opioid Epidemic and Emergency Visits

Antidrug Vaccines to Treat Substance Use and Addiction

An interview with Thomas Kosten, MD

Professor and the Jay H. Waggoner Endowed Chair in the Menninger Department of Psychiatry and Behavioral Sciences at Baylor College of Medicine

Download these free addiction resources for use in your practice 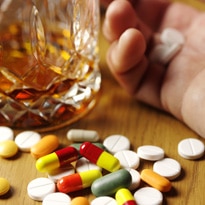 The opioid epidemic — the rapid increase of the use of prescription and non-prescription drugs for nonmedical use – is ravaging many parts of the United States, resulting in drug overdose deaths emerging as the leading cause of injury death. Statistics from Health and Human Services on human and economic costs are staggering. Rural communities have been especially hard hit, causing not only an increase in overdose risk, but also dramatic increases in new infections with hepatitis B, hepatitis C, and HIV. A recent report from Oregon o cials stated that one in four pregnancies in central Oregan are drug affected.

Yet, data from the National Institute on Alcohol Abuse and Alcoholishm (NIAA) National Epidemiologic Survey on Alcohol and Related Conditions-III show that few people with opioid use disorder receive treatment—only about 5% in the past year, and 17% ever receive help, which includes medication and behavioral counseling.

The goal of the CME Out tters Addiction Exchange is to improve recognition of the magnitude of the problem, as well as to provide strategies, resources for consumers and clinicians, and innovative approaches to meeting the challenges of opioid use disorder.

DEA 360 Strategy – Working Together to Break the Cycle of Drug Tracking, Drug Violence, and Drug Abuse

DEA Fact Sheet
The Drug Enforcement Administration is the premier drug enforcement organization in the world and the only single-mission federal agency dedicated to drug law enforcement. Using unique operational and intelligence capabilities, the men and women of DEA identify, investigate, disrupt, and dismantle major drug trafficking organizations and those who facilitate them, remove drugs and violent criminals from our neighborhoods, and fight the diversion of licit drugs.

How to Properly Dispose of Your Unused Medicines
Unused or expired prescription medications are a public safety issue, leading to potential accidental poisoning, misuse, and overdose. Proper disposal of unused drugs saves lives and protects the environment.

What You Should Know About…Marijuana Use among College Students
Despite initiatives to approve the drug for medical and recreational use across the nation, students need to understand the physical, academic, and legal risks and consequences of marijuana use.