New nanotechnology recently published online in Nature Nanotechnology, may have implications for Alzheimer’s and other neurodegenerative diseases. 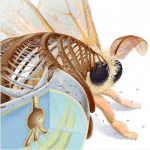 Enlargement of nanotunnels in the silk moth antenna

The engineered oily coating is similar to that found in the coating on the male silk moth’s antenna that helps it smell nearby female moths. The coating works to speed the movement of pheromones to the place where they need to be. One of the main goals of this research is to study amyloid-beta peptides that are thought to coagulate into fibers that affect the brain in Alzheimer’s disease. The team wanted to study the clumping of these peptides using nanopores, but “every time we tried it, the pores clogged up.” The engineered coating allows the peptides to pass through the nanopores without difficulty.

“What this gives us is an improved tool to characterize biomolecules,” said project head Michael Mayer. “It allows us to gain understanding about their size, charge, shape, concentration and the speed at which they assemble. This could help us possibly diagnose and understand what is going wrong in a category of neurodegenerative disease that includes Parkinson’s, Huntington’s and Alzheimer’s.”

Read the full article at: http://www.nature.com/nnano/journal/vaop/ncurrent/full/nnano.2011.12.html

Microcontent Learning and Engagement in CME

Pivoting in a Pandemic: Optimizing Expertise and Technology to Create Dynamic Learning Experiences