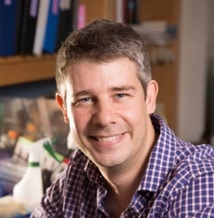 Dr. Sanders trained as a pediatric physician in the UK before pursuing a research career in genomics and bioinformatics. His work has helped characterize the role of de novo mutation in the etiology of Autism Spectrum Disorder (ASD) and identified multiple ASD risk loci including duplications of the 7q11.23 William’s Syndrome region (Sanders et al. Neuron 2011) and mutations in the sodium channel gene SCN2A (Sanders et al. Nature 2012). His work on the integration of CNV and exome data across multiple ASD cohorts recently identified 71 ASD risk loci (Sanders et al. Neuron 2015). In addition, he worked as part of a group that integrated spatiotemporal gene expression data from the human brain with these ASD-associated genes (Willsey et al. Cell 2013). This approach has implicated deep layer glutamatergic neurons in the frontal cortex during mid-fetal development in the causation of ASD. His lab has three main research questions: 1) Understanding the genetic basis of childhood neurodevelopmental disorders, in particular ASD; 2) Understanding how these genetic factors lead to the disorders; and 3) Understanding the mechanism of that leads to the male bias in ASD diagnosis, in particular through identifying the biological basis of the female protective effect.